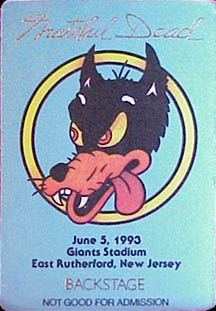 Reviewer: Trevhead824 - favoritefavoritefavoritefavorite - November 22, 2020
Subject: HEY NOW
Great show music into answers back to music pretty killer and it’s the first ever easy answers pretty great. The sugaree is real good just soars and Vince is on this whole night. The Scarlett fire is absolute 🔥 love this show I love 93 seriously underrated time.
Reviewer: Muddguts - - June 5, 2020
Subject: 27 years ago today
I had one Grateful Dead show under my belt which was 06-06-92. I was new to the scene and all I knew is that I HAD to see more shows.

So, being very naive and unaware of the “scene” my girlfriend and I jumped into our car and drove the 8 hours to get to NJ to see the show. Arrive at the box office and to our horror realize that it is sold out. Like I said, clueless to how things were in Dead land. Quickly learned that sticking a finger up in the air meant “I need a ticket” and so I did just that.

Eventually ended up getting tickets at $40 per seat and was thrilled for the next 3 hours as I got to see my favourite band playing live again.

Going to listen to it tonight on the 27th anniversary. Man I miss going to Grateful Dead concerts.
Reviewer: kbmill - - March 25, 2019
Subject: bread crumb
I sang a little while and then flew on.
Reviewer: HughMcQToo - - February 5, 2019
Subject: I believe I could fly Dude
I was at this show sitting in the lower tier. Section 133, row 26, seat 24. Still have my ticket stub. I forget what song was playing but I remember hearing a loud crash followed by a huge commotion behind me, over my right shoulder. Someone said a guy fell from the third level. It's really the only thing I remember from the show. Wouldn't have been able to name one song had I not seen it listed here on the archive. The next day on WNEW the DJ said, " ...And anyone who was a t the Grateful Dead show last night, that guy who fell from the third level lived. He's in the hospital..." I couldn't believe it. Thought for sure he died. Glad you're OK, dude. I'll have to give this a listen to see what i missed.
Reviewer: JamsOnly - favoritefavoritefavorite - July 11, 2017
Subject: Average 93
Highlights: Sugaree
Reviewer: DrivinThatTrain - favoritefavoritefavorite - May 30, 2016
Subject: To the jumper...
If you were the jumper, thanks for ruining an otherwise good show for many people. I didn't see you take the leap, but many of us in our section were so concerned that someone was seriously injured or killed that we were bummed out the rest of the show. It was the 1st time I couldn't get into Scarlet>Fire. I didn't see it happen, but we could see all the Emergency personnel working on you and the person you hot most of the 2nd set.
Reviewer: Bradrad - favoritefavoritefavoritefavoritefavorite - April 30, 2014
Subject: I am the Giant Stadium Jumper
That was me.
It was first song second set. I didnt think i could fly, I thought I could clear it. Dodging security
was pretty Lucy blinded that evening. First show of the summer tour, midwest boy, runaway w Jerry and livin on the west coast. HELLO cosmic school.
I broke my legs in 23 places (18 & 5)
made the rest of tour, cut my cast off after the last show up in an Oregon reservoir.
Stil hangin in Chico, Still tour music all sumer long! LONG LIVE LIVE MUSIC!!!!

facebook-Bradleybasshead
Reviewer: feaves - favoritefavoritefavoritefavorite - January 16, 2014
Subject: 6/5/93 thought I would float away with the weather
I too was at this show. I have never been so wet. I did not see the guy float off the 3rd tier, as I was on the floor close to the stage. I loved this show, although I think it took me like 2 hours to get out of the parking lot. I don't think my sneakers dried out for a week. It was the better show of the 2, but the weather was much kinder on Sunday.
Reviewer: RogerGA - favoritefavoritefavorite - December 7, 2013
Subject: Guy jumped off 3rd tier
You are correct. Funny I was just listening on XM to Music never stopped>easy answers.and decided to verify this was the same show they played Estimated and the guy jumped. Phil's side I was one section down from him about 5 rows back i remember it being during Estimated which was right before D/S. My recollection is he jumped right when they sang rising up to paradise because I thought how tripping must he have been to surreal and yes he seemed to be floating there.
Reviewer: ooants - - July 23, 2013
Subject: guy jumped off 3rd tier!
If I recall properly, this was a miserable, rainy, sluggish show. I have spent years trying to find anyone else who saw what I saw that night. During drums/space I happened to look over my shoulder to see a guy in only shorts, standing on the railing of the 3rd tier. As I watched he just stepped off and fell ( to me ) floated (to him) down to the first tier, bypassing the mezzanine which was tucked beneath the 3rd tier. He landed on some poor folks. It was terrible sight as this was like a 50ft. drop- or more. Anyone else see or hear of this? Good Times.
Reviewer: MikesGroover - favoritefavoritefavorite - February 18, 2013
Subject: Some tasty moments
I had really good floor seats for this show, but musically it didn't stick into my brain much. On relistening, I found that there's some great moments, though the energy levels and performance slide a bit as the second set goes on.

This is definitely an ear monitor mix, as Jerry can be heard saying “My guitar’s doing that thing again” about two minutes into Music.

Both Eternity and Sugaree are very strong versions. Sticking the debut of Easy Answers into Music was a surprise move. As we know, this wasn’t one of Bobby’s more popular tunes the last three years of the band. I like the fuzzy guitar, but get annoyed by the jarring delivery. The return to Music is less jarring, and the band picks up the set closer nicely. We even get some brief trilling from Jerry.

The second set starts off on great footing with a tight Scarlet>Fire, but loses steam with the one-two punch of Way to Go and Crazy Fingers.

"Eternity" and "Easy Answers" took some time to grow on me (though i love them both now), and I loved "Corrina" and "Liberty" from the 1st time i heard them. "Eternity" is a simple but beautiful song writted with Willie Dixon and "Easy Answers" gets more depth each time its played and is now a song I look forward to (at Ratdog shows) since hearing the additions of Neil Young and Wasserman on the studio version and hearing Kenny Brooks add some depth with the sax. I would've loved to hear Branford sit in for this song.

Anyway, 5 stars for the effort, and 5 stars for new tunes.
1 star for the unappreciative and excessively critical cynics.
Reviewer: Duke Leto II - favoritefavoritefavorite - June 8, 2007
Subject: Please Do Not Jump Over The Wall!
A pre-recorded video message of Mickey was played pleading with the hoarde to "Please do not jump over the wall" because hey, "You cant dance with a broken leg". Pretty bizarre for my first show...I cant believe I remembered that.
Hey "Hugs Are Free" sister, you saved my life and Ill always remember you!
Peace
Reviewer: lobster12 - favoritefavoritefavorite - June 28, 2006
Subject: 3 1/2 stars
solid show. love the butchering of easy answers. You wonder why On the road agian, lazy lightning and lost sailor aren't good enough to revive but EA is played every other night. Those of you who got to see it played out of space must have been even more crushed thinking you escaped the horror. Pretty good show for 93 and the first set, sans EA, is particularly strong
Reviewer: zzzboxofrainzzz - favoritefavoritefavorite - April 2, 2006
Subject: Another nite in Jersey
It was sly of the boys to slip Easy Answers into the middle of Music Never Stops. Even so, knew I had another tune to add to the "hope they don't play it" list. A list that didn't exist until spring tour 1980, and stayed Bobby and Jerry tune free until Liberty, Corrina and Easy Answers!!!! In any event, first set was a great set for 1993. Second started well, but the energy was definitely gone after Fire.... Still, there was no other way I would have chosen to spend an evening in the Swamps of Jersey!!!!
Reviewer: dmilks - favoritefavoritefavorite - November 22, 2005
Subject: 6-5-93
Great 14 minute Sugaree. Great first set all around, pushing 4 stars. Scarlet>Fire is strong with Jerry really getting into his solos on Fire. Strong start to the East/Midwest Summer tour.
O1 is strong. Stella is sloppy, and Jerry never sings the "Gonna Make 'em shine" line, due to the confusion and tempo issues. Sat Nite and Box are average.

Sounds is 5 stars all around. Crispy and beefy.

That aside, the Sugaree is pretty hot, but other than that a very average show.
Reviewer: OldSchoolJersey - favoritefavoritefavorite - March 17, 2005
Subject: Question
I seem to remember a pre-recorded message from Mickey played before Bucket -- telling all the derelicts in Jersey that there had better not be any floor-crashing like the year before, lest the Dead be barred from future Giants Stadium shows. True? Or perhaps a figment of my imagination...other than that, pretty average show.

Also -- great Jersey moment I witnessed -- bunch of yellowjackets following a hesher into the men's room -- dragged him out kicking and screaming -- he had a six-pack of Budweiser tall-boys taped to the inside of his pants and he was PISSED that he was getting dragged out to his doom.